“Any man who states that his philosophy of the rapture is the word of God, or that Daniel’s 70th week will occur within the next ten or twenty years is not only a liar, but manipulates the word of God to justify his theories.”

I wrote the above statement more than 15 years ago, but is it true today?

Can the beast take over the world in the next five years?

Lets take stock what must happen for this to occur:

With Covid-19 we see that the plan to bring this forward has indeed been accelerated as we approach the 2030 agenda and the majority of rabbi the world over believe Moshiach will arrive anytime.

Now is it possible for the above to occur by 2024? Nothing is impossible, but this author does not believe logically this can happen within that time frame.

We are to be stewards and watch, not make ridiculous predictions that go against logic and reality as many have done over the last thirty years – you know who you are.

These are harsh statements and I hope you examine what you are teaching to Jesus’ sheep as they are Adonai’s, His, not your own. We as men can come to think of ourselves as instruments of YHWH and those who are in Christ are just that.

However, the enemy always seeks an avenue where he may sprinkle poison that confusion and deception may abound for the goal of contradiction, strife, and the fruit of the labor – separation from the body of Christ. An erected barrier built on subtle manipulations that keep men and women from accepting Christ, due to ridiculous fictional portrayals of events no sane person can stomach.

Again the tools of the enemy:

In history we do not see the traces of events that happen along the whimsical thoughts and fantasies of men, but rather over long expanses of time does any nation erode.

It has not happened in 2,000 years, but we know it will happen and we currently see the erosion since the 1940’s. Just Stop and think about that for a minute – since the 1940’s, over fifty years – a slow erosion.

BUT all these things took many, many years of natural progression, as is the rightful transition.

YHWH works with reality, on His realistic timeline – NOT your predictions, NOT your panic theory.

Many assume that the billion’s of Christians on the planet are going to be overwhelmed politically and militarily within ten years. This was sheer fantasy years ago. In our fast computing age where even the poorest cultures have cell phones to record and communicate is it any wonder that propaganda can be delivered effectively to the masses?

Hitler took Poland in 6 weeks over 80 years ago. So this is possible, but to concede by 2030 is not logical.

We find however, that theorists have found away around logic simply by saying, “the church will be raptured,” before all the Christians are hated. These blindfolded chaps are merely trying to compress time in their own bubble and to do so requires manipulation of not only logic, but scripture as well.

We see the enemies of Jews and the Saints portray Christianity as “white supremacy” and equate Christians to Nazi’s, as the theme is now becoming as the days under Hitler and his propaganda machine.

We know who are the organizations and people behind this. Although many go to great lengths to hide themselves through LLC’s, CEO’s, lawyers, and corporate shells. Those who own HBO, Showtime, CBS, Amazon Prime, Netflix, and Hollywood corporate distribution have conglomerated their resources together over many years into their now monopolistic empire of which is required for them to unveil their Moshiach, whether they want to or not.

We see the anti-Christian portrayal in just about every release of “entertainment” knowing that Biblical prophecy is fulfilling before our very eyes. Here is a very short list:

From the entertainment industry we see the acceleration over the last 3 years of Hollywood/streaming platforms churning out anti-Christian formats in just about every venue. From kids cartoons to after school programs, to TV shows like Late Night and Saturday Night Live, the propaganda machine is in full anti-Christian mode.

However, we are to be obedient to HaMashiach, we are to ‘watch,’ and not be found at His coming running around naked. We are not commanded to make vocal statements to audiences of millions that the beast is going to take over the world in the next five years when this is economically and politically not plausible, although the enemy is working diligently for this goal.

In essence, to do so gives Christian’s and Jews a bad name. It does not build up Christianity, no, it generates a mockery of Christ. For the goal of proving prophecy or that we as Christians are in the “end times” – many make a mockery of Christ by entertaining foolish theories that have no logic or sound reason and selling this to the masses when it is quite evident to the fairly educated (secular and Christian) that these theories are indeed rubbish.

We must first remember that anyone can claim themself as a Jew, or claim they are doing “good for the community” but unless they follow and believe in HaShem, then their words mean nothing and they aid in destruction of all Jewish culture as we have seen numerous times historically.

The fallacy of “all Jews will be saved” is a non-Torah ideology birthed from those who do not wish to follow Judaism, but wish to remain Jewish while having a same sex marriage and living in complete apostacy. while claiming themselves Jews. YHWH will not be mocked. Torah and Nevi’im are quite clear on the subject and reject such ideology and those who do so are kareth according to both Talmud and Tanakh.

We also find more and more that occult’s are jumping on this doom band wagon to gain members and sell books with the word “Armageddon” having no understanding of the actual definition.

As we approached the year 2012, many Christians adapted the Mayan philosophy of ascension, Hindu reincarnation, and all forms of occult practices by riding the wave of Armageddon theory. Many of you are pandering your gibberish to the masses. You are indeed aiding and abetting these occult practices with your personal false theories that you call “god’s word” through occult psychology and entertainment.

Currently in the Christian world there is a fog of false delusion hovering over the church. The ministers carry the theories of hear-say as fog machines to the pulpit and blanket the audience with thick acrid smoke so that Christians may not see the freedom they have, but dwell in a realm of frantic fear; awaiting their doom at the rearing head of the antichrist, who will pop out of their bushes at any moment.

These are harsh statements and well deserved. The industry feeds doom and destruction of the world to the tune of, “millions disappear in the rapture!” Unmanned car crashes all over the globe; death and chaos as the antichrist (who according to many is alive today) destroys mankind, meanwhile, those who believe fly off to heaven to be with the Lord Jesus Christ.

Make no mistake about it, being a Christian during the tribulation time does not mean you will be raptured, nor does it mean you will avoid suffering. Only men and women have provided these false promises.

You can hear it from many a pulpit today. Promises of bliss and deliverance from suffering for all those who believe in Christ during the oncoming tribulation and that this tribulation can happen tomorrow! To those who do not study the word of God, or those who choose to believe these men and women in ignorance are deceived.

These tools are used to sell books, movies, and cause many to live for tomorrow rather than for today. If you are unaware one of the greatest sales tactics is to cause a hurried alarm, or feeding frenzy upon the masses. Once the masses are riled up on a subject they can then be sold the books, videos, and tapes to teach them how to live a panicked life where they can be raptured at 1:30 pm before the kids get home from school and why they should give their money now since this could happen at any moment!

These ideologies can be read on many popular forums, where people tell you that you can be ‘raptured at any moment,’ and that every news clipping of chaos that comes our way is a ‘sign of the times.’

Christians have not understood that this is a great deception to not only take integrity from the body of Christ, but to lay heavy burden’s on ministers and Christianity in general by those stealing your money using advertising methods you have no knowledge of.

However, the time of this deception is coming to a close as the time of the Christian persecution draws near where being a Christian means you will be hated and killed, not raptured in bliss.

The only book that can prepare you for this time is the Bible and your faith in Christ. Not everyone is a salesman or uses the tactics of selling to an audience. How can the average individual know if you’re being sold? There is one thing for sure in business, it is that there will always be someone to buy what you are selling. You can call these individuals who sell you alarmists. Their goal is to suck the money out of your wallet.

If you are not going to experience the tribulation then give us your money to insure we can produce videos, tapes, and books to help those that are left behind.

“You are doing a great work by giving us your money!”

No, you are just buying them a Porsche, or a 5,000 Sqft home. Joel Osteen is a perfect example of money motivation preaching having purchased his 17,000 Sqft home. 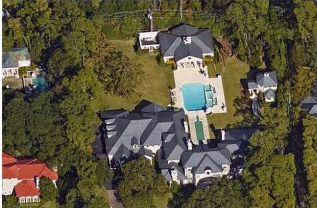 “The house cost him $10.5 million, and Joel and his wife also own a second $2.9 million mansion in Tanglewood, Houston. The River Oaks stone property boasts loads of unique and luxurious features which span across the large mansion, including 6 bedrooms, 6 bathrooms, 5 open wood fireplaces, 3 elevators, a 1 bedroom guest house and outdoor pool and pool house.”

“It also has a large grey concrete driveway which has space to fit probably over 20 cars! What a perfect spot for his Ferrari.”

Remember what our Adonai has said Mr. Olsteen,

Here is the simple truth.

If you are alive during during Onpiov Moshiach you will experience the trials of this time. Being a Christian, you will be able to do the greatest work in history – keep people from accepting the mark of the beast damning them forever.

Only through accepting the atonement of Christ Jesus, our Lord and savior, can they be delivered from the beast and eternal damnation.